Did you miss the fully booked concert "I am another now" (Jag är en annan nu) where Peter Hägerstrand and the band Badhusepoken interpreted 100 years of Åland poetry? Now you have another chance! A new concert is planned in Alandica's main hall on March 3rd, 2023.

For over a year, the music maker and artist Peter Hägerstrand has made a deep search into Ålandic poetry. The intention has been to compose and arrange a selection of poems into a musical whole. The concert, which was performed at the beginning of 2022, was fully booked to the last seat and praised by both cultural critics and the audience.

In 2021, Peter Hägerstrand was nominated for the Nordic Council's Music Prize - an honorary nomination and we will definitely see and hear very exciting things from him in the future. For the work of composing the poems, he received a work scholarship from Åland's cultural delegation.

The selection of poems in the concert reflects a society in development. The earliest poem is from 1927 and one of the newer ones is only a few years old. The poems are personal, but they also have something specifically Ålandic about them. By extension, a composition of pieces of music is formed here that reflects Åland, a Åland of the past, a Åland of today, the feelings for Åland and an Åland in relation to the rest of the world. The different subjects and objects of the poems are as wide-ranging as the background and approaches of the authors and men. The listener gets to hear, among other things, A day a life (Georg Kåhre), Night (Katarina Gäddnäs) Amber (Cecilia Dahlström), Lullaby (Joel Pettersson), Five years later (Mikaela Nyman) m.m.

The musical setting is of course based on Peter's specific tonal language.

” - It is melodic playful but also challenging. From whispers to roars.” says Peter.

Peter's work with film and theater music is heard in the music. It is sometimes atmospheric and hypnotic to turn into pure and simple pop in the next moment. The music is both acoustic and electronic and various sound effects contribute to the cinematic-theatrical setting.

To help him on stage, Peter has the band Badhusepoken and guest artists. They are united in a playful and sensitive relationship to the music.

The concert has been named "I am another now", a line of text that is included in Carina Karlsson's poem "It shines in the windows", and expresses exactly what the project entailed - to let the poetry be reborn in another form. An artistic expression that gives birth to another. A music meeting with historical wings. The musical experience will also be supplemented with a visuality to enhance the experience of the audience and viewers. Several art and expression forms meet, interpret and convey the lyrics, and bring the poems to life again, in a new format.

Peter Hägerstrand is a composer and musician. Born and raised on Åland. Versatile since his public debut in 1979. Peter has played and toured and released records with a variety of orchestras. In recent years, there have been a number of critically acclaimed records in their own name. In addition to working in the service of rock, Peter has worked a lot with music for film, television and theater. Can be mentioned the film filmed in Åland Lärjungen which was Finland's official Oscar candidate in 2014. As a theater composer, Peter's music has been heard on both national stages in Finland and also at the Royal Dramatic Theater in Sweden. In 2017, Peter Sallysalminen was awarded the prize and in 2021 he was nominated for the Nordic Council Music Prize. In the autumn of 2022, the English-language project STRAND will also make its debut on Presence Records. Read more about Peter Hägerstrand here.

Curt Quarnström is one of the pioneers of pop music on Åland and in Finland. From being a pop idol in the Hitch Hikers, life has continued in the spirit of music and he is today a hotly sought after bassist. Guy “Kantorn” Karlsson we have all encountered in some context. He provides musical framing for life's crucial moments; baptism, wedding, funeral or why not when he whips us all to hysteria as the leader of the Taxman down at the pub. Despite his young years, Markus Helander is perhaps the most renowned of all in the band. He has appeared on more than 30 recorded albums and played drums in many parts of the world. Macke has just returned from a tour with Lill Lindfors.

The audience is promised surprises and a magical evening. A piece of musical history on Åland. 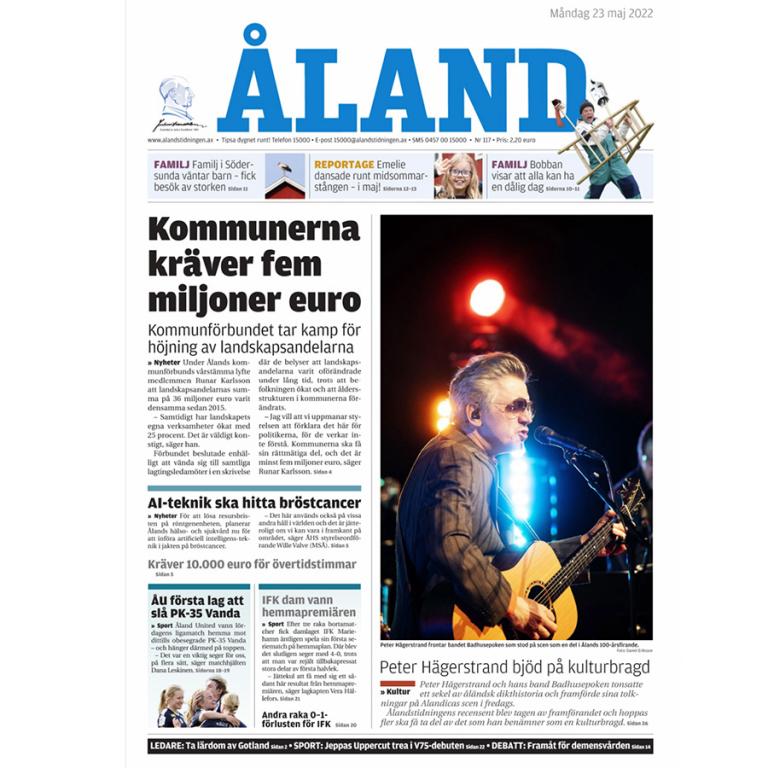 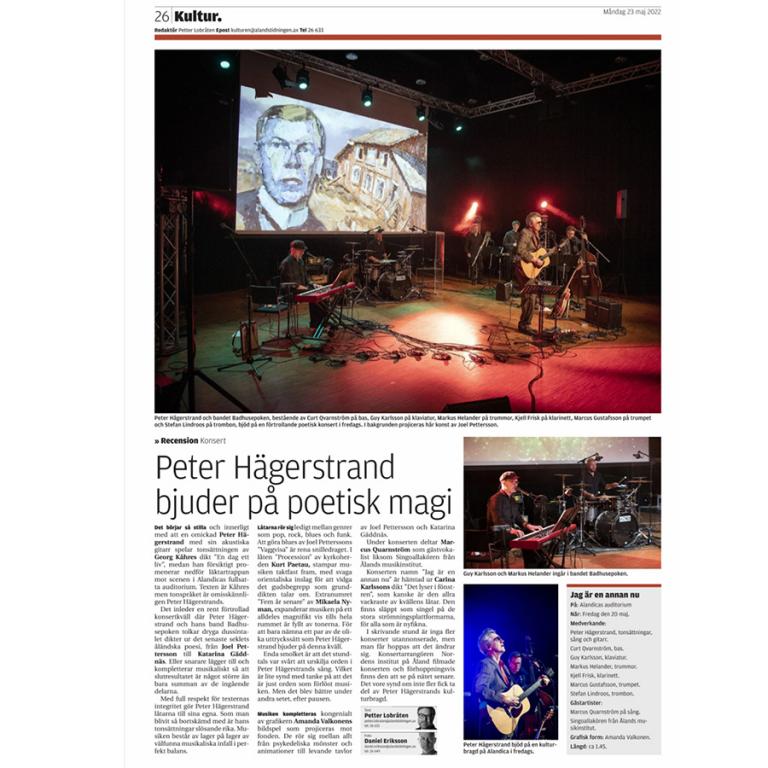 Alandica kultur- och kongress, Strandgatan 33 (Stora salen)
Pris: 27€
Back to the calendar
Back to the front page
Top of the page