Digitally created works of art that are exhibited physically.

Jakob Olsen was born in Østerbro in Copenhagen in 1954. Father Ib K Olsen was a graphic designer, artist and jazz musician. In connection with the Covid period, Jakob rediscovered visual art after a 45-year paus.

– I work mostly on iPad, I am very inspired by David Hockney, who also produces pictures on iPad, but has also produced some pictures with touch and brush. I experiment and produce the images I want to see myself. I am inspired by modernist painters such as Picasso, Klee and Kandinsky, but also by the Danish modernists Erik Hoppe, Olaf Rude and Asger Jorn.

Jakob started uploading his photos on Facebook, where he received a good response. He began writing stories about his time as a musician and sound engineer when he met many of jazz's great artists: Stan Getz, Oscar Peterson, Dexter Gordon. At the same time, he was active on the Danish music scene as a musician, teacher and arranger.

– So I am writing a book about this. I was sitting on a couch in January 2021 during Covid19 and I felt completely lost. I had been looking forward to playing and training full time after I retired in October 2020, but everything was canceled. I started practicing on my own, but I just got frustrated. I sat there in the dark, staring out into the empty air. Then I started scribbling on my iPad and suddenly pictures came out of me. Abstract and naturalistic.

– I started to go for long walks and found inspiration on my way - buildings, signs and city parks. In many ways I was brought up with art, my father was a trained lithographer, but was an excellent illustrator who drew in Politiken, one of the largest Danish newspapers, later he became a graphic designer.

In a way, I work with a cultural capital, and it feels natural. I am not limited by one style, but driven only by the desire to be creative. A large part of what I produce is improvised - spontaneously created in the present.

– It's been over 45 years since I stopped using visual art, but it's never too late!

Nordens institut på Åland, Storagatan 9, Mariehamn
Back to the calendar
Back to the front page

Nordic Ålandic
kl. 17:00 to 20:00
Nordens institut på Åland, Storagatan 9
Are there words and expressions that in Åland are considered typically Ålandic... Go to the event » 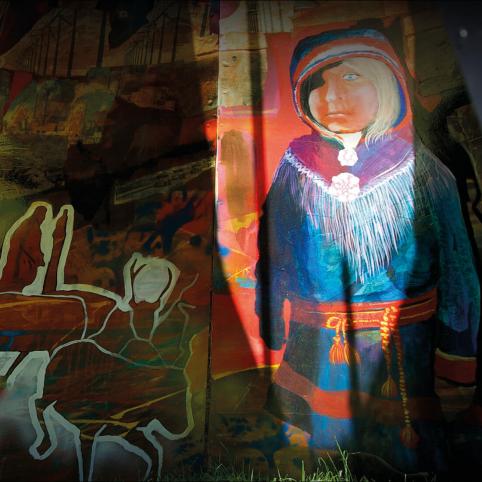 Bureaucratic Colony
kl. 17:00 to 20:00
Nordens institut på Åland, Storagatan 9
Anders Sunna is a North Sami artist from a reindeer herding family in... Go to the event »

One evening - three conversations about craft
kl. 18:30 to 20:00
Nordens institut på Åland, Storagatan 9, Mariehamn
Now we put some fokcus om Åland craft and handicraft through three fine craft... Go to the event »
Top of the page